In my last series of posts on Transformers, I talked about how a transformer works and how to implement one yourself for a translation task.

In this post, I will go a step further and try to explain BERT, one of the most popular NLP models that utilize a Transformer at its core and which achieved State of the Art performance on many NLP tasks including Classification, Question Answering, and NER Tagging when it was first introduced.

Specifically, unlike other posts on the same topic, I will try to go through the highly influential BERT paper — Pre-training of Deep Bidirectional Transformers for Language Understanding while keeping the jargon to a minimum and try to explain how BERT works through sketches.

So, what is BERT?

In simple words, BERT is an architecture that can be used for a lot of downstream tasks such as question answering, Classification, NER etc. One can assume a pre-trained BERT as a black box that provides us with H = 768 shaped vectors for each input token(word) in a sequence. Here, the sequence can be a single sentence or a pair of sentences separated by the separator [SEP] and starting with a token [CLS]. We will get into explaining these tokens in more detail in later stages in this post.

But, What is the use of such a Blackbox?

A BERT model essentially works like how most Deep Learning models for Imagenet work. First, we train the BERT model on a large corpus (Masked LM Task), and then we finetune the model for our own task which could be Classification, Question Answering or NER, etc. by adding a few extra layers at the end.

For example, we would train BERT first on a corpus like Wikipedia(Masked LM Task) and then Finetune the model on our own data to do a classification task like classifying reviews as negative or positive or neutral by adding a few extra layers. In practice, we just use the output from the [CLS] token for the classification task. So, the whole architecture for fine-tuning looks like this:

So, as I said in my previous post on transformers that all Deep Learning is just Matrix Multiplication, we just introduce a new W layer having a shape of (H x num_classes = 768 x 3) and train the whole architecture using our training data and Cross-Entropy loss on the classification.

One could also have just gotten the sentence features through the last layer and then just run a Logistic Regression Classifier on top or take an average of all the outputs and then run a logistic regression on top. There are many possibilities, and what works best will depend on the data for the task.

In the above example, I explained how you could do Classification using BERT. In pretty much similar ways, one can also use BERT for Question Answering and NER based Tasks. I will get to the architectures used for various tasks by the end of this post.

But, How is it different from an Embedding then?

You are getting the Gist. Essentially, BERT just provides us with contextual-bidirectional embeddings.

So, for a sentence like “BERT model is awesome.” the embeddings for the word “model” will have context from all the words “BERT”, “Awesome”, and “is”.

Enough, Just tell me about how it works?

Now we understand the basics; I will divide this section into three major parts — Architecture, Inputs, and Training.

This is the most simple part if you have read my post on Transformers. BERT is essentially just made up of stacked up encoder layers.

In the paper, the authors have experimented with two models:

We give inputs to BERT using the above structure. The input consists of a pair of sentences, called sequences, and two special tokens — [CLS] and [SEP].

So, in this example, for two sentences “my dog is cute” and “he likes playing”, BERT First uses wordpiece tokenization to convert the sequence into tokens and adds the [CLS] token in the start and the [SEP] token in the beginning and end of the second sentence, so the input is:

The wordpiece tokenization used in BERT necessarily breaks words like playing into “play” and “##ing”. This helps in two ways —

Token Embeddings: We then get the Token embeddings by indexing a Matrix of size 30000x768(H). Here, 30000 is the Vocab length after wordpiece tokenization. The weights of this matrix would be learned while training.

We finally reach the most interesting part of BERT here as this is where most of the novel concepts are introduced.I will try to explain these concepts by going through various architecture attempts and finding faults with each of them to arrive at the final BERT architecture.

Attempt 1: So, for example, if we set up BERT training as below:

We try to predict each word of the input sequence using our training data with Cross-Entropy loss. Can you guess the problem with this approach?

The problem is that the learning task is trivial. The network knows beforehand what it has to predict, and it can thus easily learn weights to reach a 100% classification accuracy.

Attempt 2 — Masked LM: This starts the beginning of the paper’s approach to overcoming the previous approach’s problem. We mask 15% random words in each training input sequence and just predict output for those words. In Pictorial terms:

Thus the loss gets calculated only over masked words. So now the model learns to predict words it hasn’t seen while seeing all the context around those words.

Please note, I have masked 3 words here even when I should mask just 1 word as 15% of 8 is 1 to explain in this toy example.

Can you find the problem with this approach?

This model has essentially learned that it should predict good probabilities for only the [MASK] token. That is at the prediction time or at the fine-tuning time when this model will not get [MASK] as input; the model won’t predict good contextual embeddings.

In this attempt, we will still mask 15% of the positions. But we will replace any word in 20% of those masked tokens by some random word. We do this because we want to let the model know that we still want some output when the word is not a [MASK] token. So if we have a sequence of length 500, we will mask 75 tokens(15% of 500), and in those 75 tokens, 15 tokens(20 % of 75) would be replaced by random words. Pictorially, here we replace some of the masks by random words.

Advantage: The network will still work with any word now.

Problem: The network has learned that Input Word is never equal to the Output word. That is the output vector at the position of “random word” would never be “random word.”

To solve this problem, the authors suggest the below training setup.

So, now we have the best setup where our model doesn’t learn any unsavory patterns.

But what if I keep only Mask + Unmask Setup? The model will learn that whenever the word is present, just predict that word.

From the BERT paper:

Many important downstream tasks such as **Question Answering (QA) **and Natural Language Inference (NLI) are based on understanding the relationship between two sentences, which is not directly captured by language modeling. In order to train a model that understands sentence relationships, we pre-train for a binarized next sentence prediction task that can be trivially generated from any monolingual corpus.

So, now we understand the Masked LM task, BERT Model also has one more training task which goes in parallel while **Training Masked LM **task. This task is called Next Sentence Prediction(NSP). So while creating the training data, we choose the sentences A and B for each training example such that 50% of the time B is the actual next sentence that follows A (labelled as IsNext), and 50% of the time it is a random sentence from the corpus (labelled as NotNext). We then use the CLS token output to get the binary loss which is also backpropagated through the network to learn the weights.

So we have got the BERT model now that can provide us with contextual embeddings. How can I use it for various tasks?

We already have seen how we can use BERT for the classification task by adding a few layers on top of the [CLS] output and fine-tuning the weights.

Here is how we can use BERT for other tasks, from the paper: 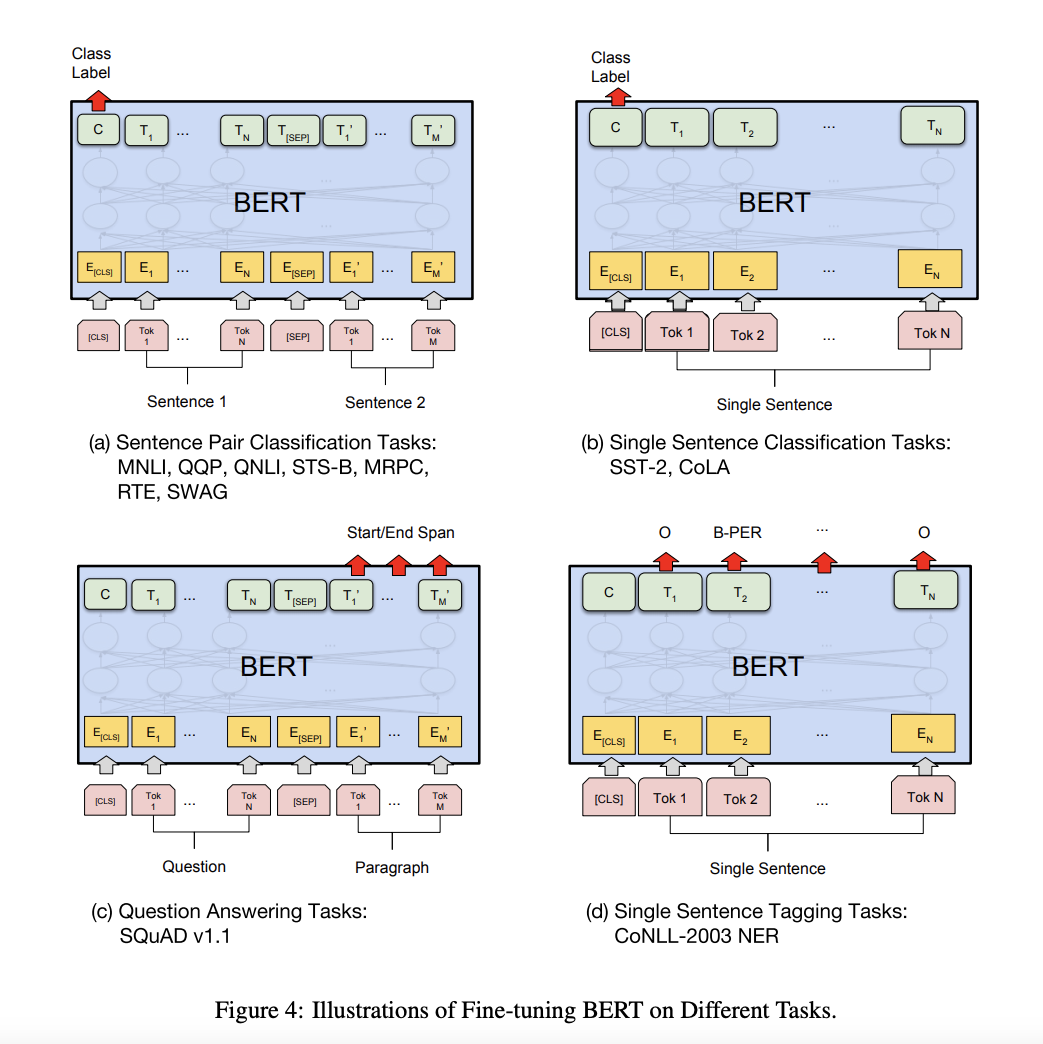 Let’s go through each of them one by one.

So, in the above example, we define two vectors S and E(which will be learned during fine-tuning) both having shapes(1x768). We then take a dot product of these vectors with the second sentence’s output vectors from BERT, giving us some scores. We then apply Softmax over these scores to get probabilities. The training objective is the sum of the log-likelihoods of the correct start and end positions. Mathematically, for the Probability vector for Start positions:

Where T_i is the word we are focussing on. An analogous formula is for End positions.

To predict a span, we get all the scores — S.T and E.T and get the best span as the span having the maximum Score, that is max(S.T_i + E.T_j) among all j≥i.

In this post, I covered how BERT works in a simple to understand manner. If you just want to remember a few ideas that BERT introduced just remember these:

Now, finally, my turn to ask the question: Did you get how BERT works? Yes, or No, you can answer in the comments. :)

If you want to learn more about NLP, I would like to call out an excellent Natural Language Processing course from the Advanced Machine Learning Specialization. Do check it out.

I am going to be writing more of such posts in the future too. Let me know what you think about them. Should I write on heavily technical topics or more beginner level articles? The comment section is your friend. Use it. Also, follow me up at Medium or Subscribe to my blog .

And, finally a small disclaimer — There might be some affiliate links in this post to relevant resources, as sharing knowledge is never a bad idea.