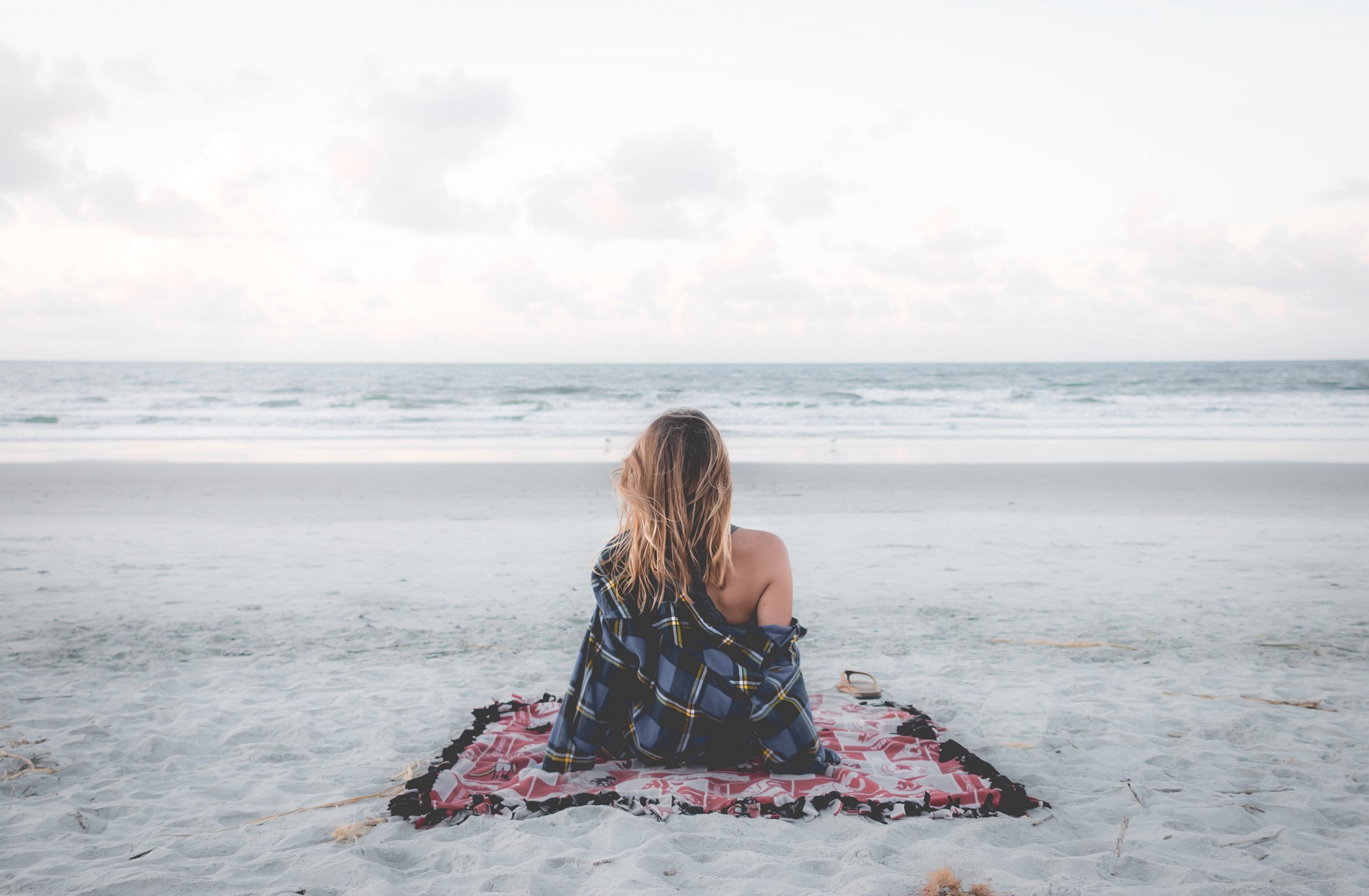 Just recently, I had written a simple tutorial on FastAPI, which was about simplifying and understanding how APIs work, and creating a simple API using the framework.

That post got quite a good response, but the most asked question was how to deploy the FastAPI API on ec2 and how to use images data rather than simple strings, integers, and floats as input to the API.

I scoured the net for this, but all I could find was some undercooked documentation and a lot of different ways people were taking to deploy using NGINX or ECS. None of those seemed particularly great or complete to me.

So, I tried to do this myself using some help from FastAPI documentation . In this post, we will look at predominantly four things:

So, without further ado, let’s get started.

You can skip any part you feel you are versed with though I would expect you to go through the whole post, long as it may be, as there’s a lot of interconnection between concepts.

Before we start with using the Amazon ec2 instance, we need to set one up. You might need to sign up with your email ID and set up the payment information on the AWS website . Works just like a single sign-on. From here, I will assume that you have an AWS account and so I am going to explain the next essential parts so you can follow through. 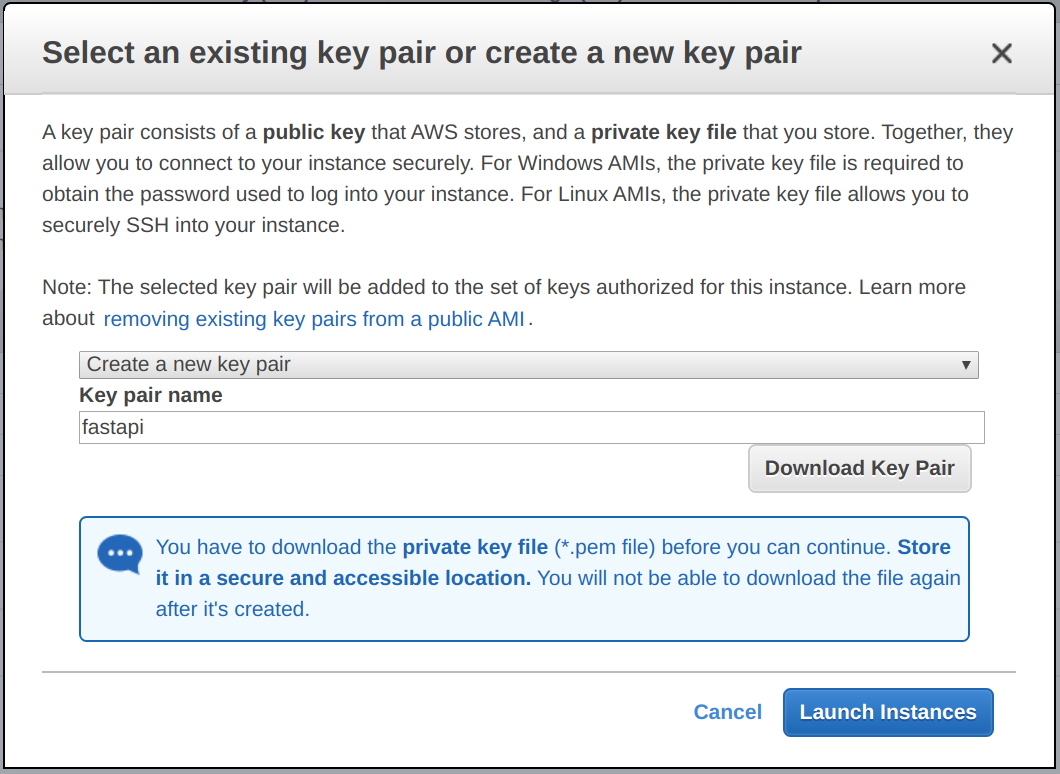 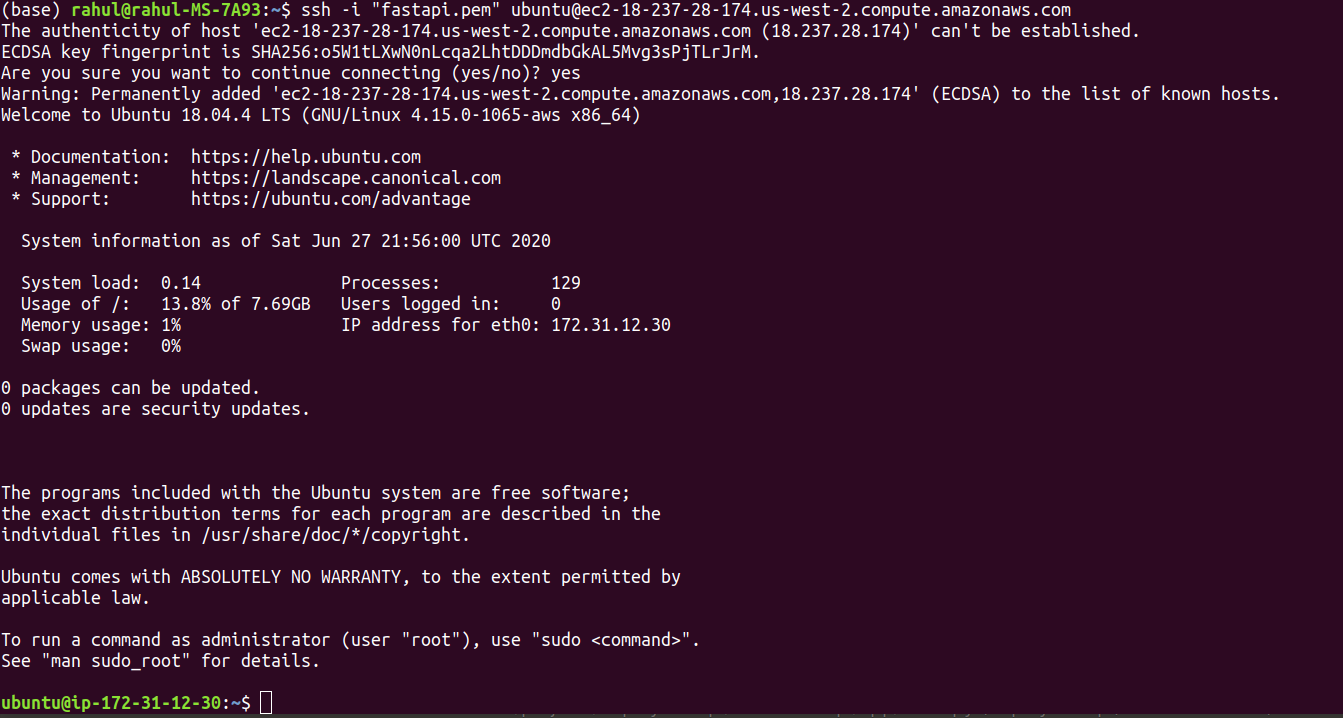 Now we have got our Amazon instance up and running. We can move on here to the real part of the post.

So, here I will try to create an Image detection API. As for how to pass the Image data to the API? The idea is — What is an image but a string? An image is just made up of bytes, and we can encode these bytes as a string. We will use the base64 string representation, which is a popular way to get binary data to ASCII characters. And, we will pass this string representation to give an image to our API.

A. Some Image Basics: What is Image, But a String?

So, let us first see how we can convert an Image to a String. We read the binary data from an image file using the ‘rb’ flag and turn it into a base64 encoded data representation using the base64.b64encode function. We then use the decode to utf-8 function to get the base encoded data into human-readable characters. Don’t worry if it doesn’t make a lot of sense right now. Just understand that any data is binary, and we can convert binary data to its string representation using a series of steps.

As a simple example, if I have a simple image like below, we can convert it to a string using: 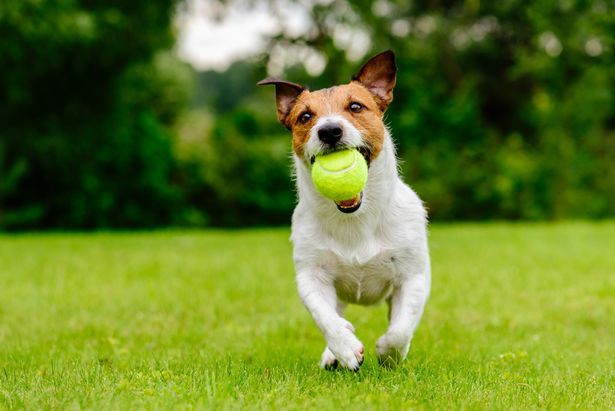 Here I have got a string representation of a file named dog_with_ball.png on my laptop.

So here is a way to create a PIL image back from an image’s base64 string. Mostly we just do the reverse steps in the same order. We encode in ‘utf-8’ using .encode. We then use base64.b64decode to decode to bytes. We use these bytes to create a bytes object using io.BytesIO and use Image.open to open this bytes IO object as a PIL image, which can easily be used as an input to my PyTorch prediction code.*** Again simply, it is just a way to convert base64 image string to an actual image.***

So does this function work? Let’s see for ourselves. We can use just the string to get back the image. 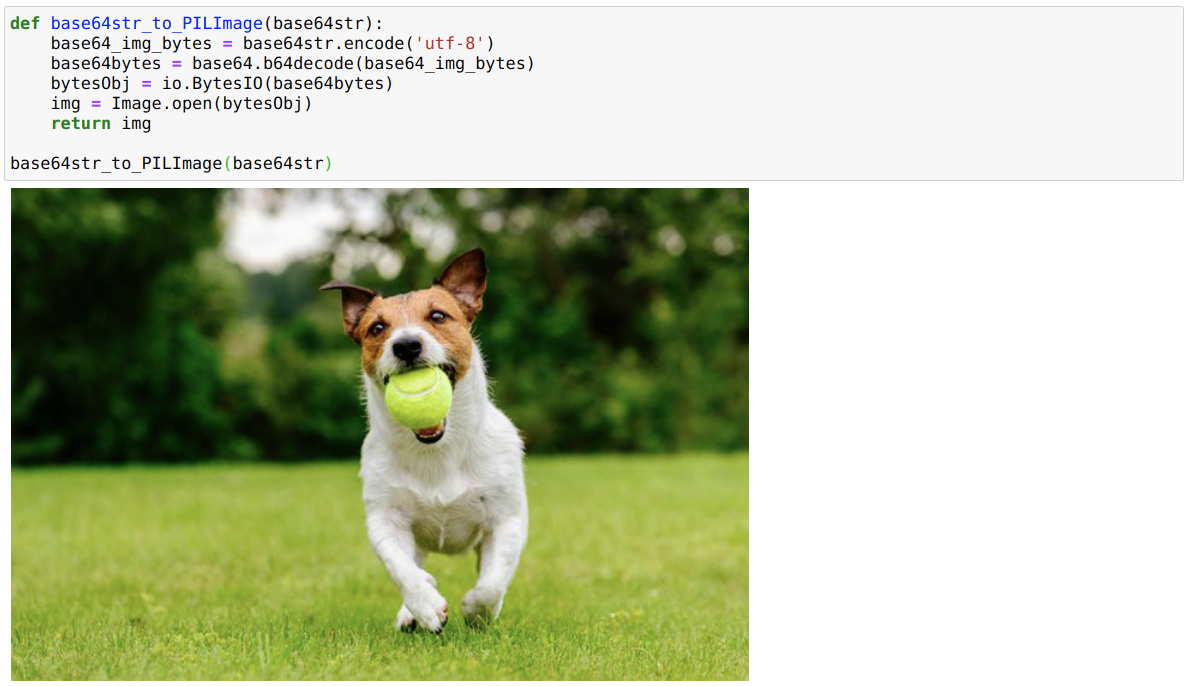 And we have our happy dog back again. Looks better than the string.

B. Writing the Actual FastAPI code

Here, I will be using a Pytorch pre-trained fasterrcnn_resnet50_fpn detection model from the torchvision.models for object detection, which is trained on the COCO dataset to keep the code simple, but one can use any model. You can look at these posts if you want to train your custom image classification or image detection model using Pytorch.

Below is the full code for the FastAPI. Although it may look long, we already know all the parts. In this code, we essentially do the following steps:

Before we move on to AWS, let us check if the code works on our local machine. We can start the API on our laptop using:

The above means that your API is now running on your local server, and the –reload flag indicates that the API gets updated automatically when you change the fastapiapp.py file. This is very helpful while developing and testing, but you should remove this –reload flag when you put the API in production.

You can now try to access this API and see if it works using the requests module:

And so we get our results using the API. This image contains a dog and a sports ball. We also have corner 1 (x1,y1) and corner 2 (x2,y2) coordinates of our bounding boxes.

Although not strictly necessary, we can visualize how the results look in our Jupyter notebook:

Here is the output: 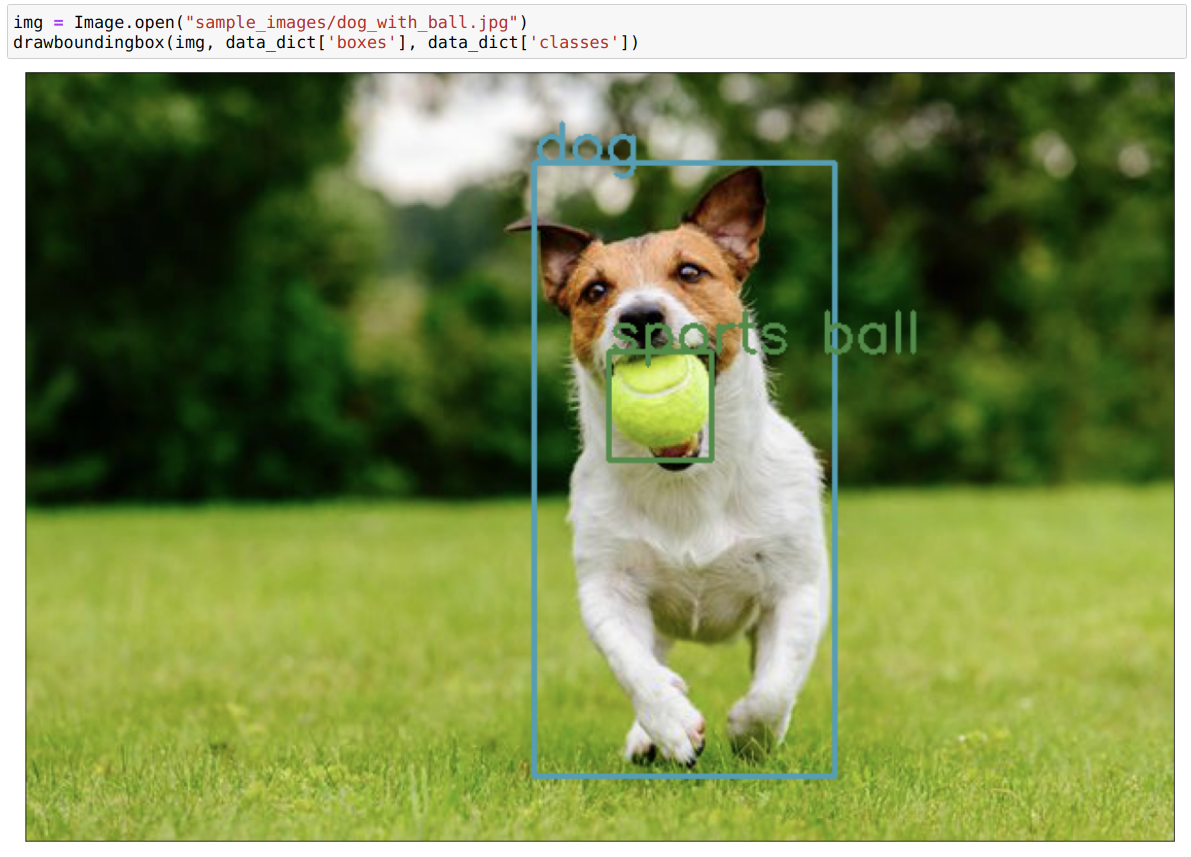 Here you will note that I got the image from the local file system, and that sort of can be considered as cheating as we don’t want to save every file that the user sends to us through a web UI. We should have been able to use the same base64string object that we also had to create this image. Right?

Not to worry, we could do that too. Remember our base64str_to_PILImage function? We could have used that also. 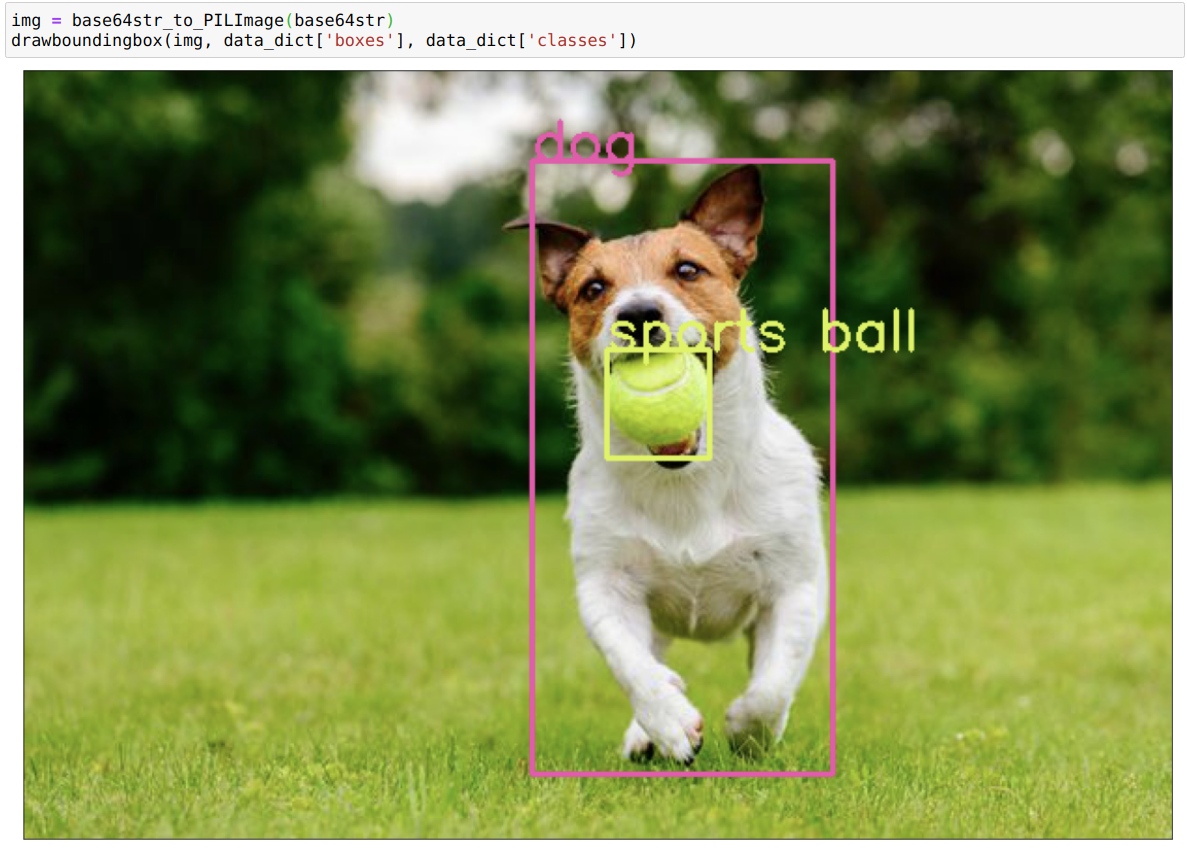 That looks great. We have our working FastAPI, and we also have our amazon instance. We can now move on to Deployment.

Till now, we have created an AWS instance and, we have also created a FastAPI that takes as input a base64 string representation of an image and returns bounding boxes and the associated class. But all the FastAPI code still resides in our local machine. How do we put it on the ec2 server? And run predictions on the cloud.

We will deploy our app using docker, as is suggested by the fastAPI creator himself. I will try to explain how docker works as we go. The below part may look daunting but it just is a series of commands and steps. So stay with me.

We can start by installing docker using:

We then start the docker service using:

B. Creating the folder structure for docker

Here dockerfastapi is our project’s main folder. And here are the different files in this folder:

i. requirements.txt: Docker needs a file, which tells it which all libraries are required for our app to run. Here I have listed all the libraries I used in my Fastapi API.

How Docker works?: You can skip this section, but it will help to get some understanding of how docker works.

The dockerfile can be thought of something like a sh file,which contains commands to create a docker image that can be run in a container. One can think of a docker image as an environment where everything like Python and Python libraries is installed. A container is a unit which is just an isolated box in our system that uses a dockerimage. The advantage of using docker is that we can create multiple docker images and use them in multiple containers. For example, one image might contain python36, and another can contain python37. And we can spawn multiple containers in a single Linux server.

Our Dockerfile contains a few things:

iii. main.py: This file contains the fastapiapp.py code we created earlier. Remember to keep the name of the file main.py only.

We have got all our files in the required structure, but we haven’t yet used any docker command. We will first need to build an image containing all dependencies using Dockerfile.

We can do this simply by:

This downloads, copies and installs some files and libraries from tiangolo’s image and creates an image called myimage. This myimage has python37 and some python packages as specified by requirements.txt file. 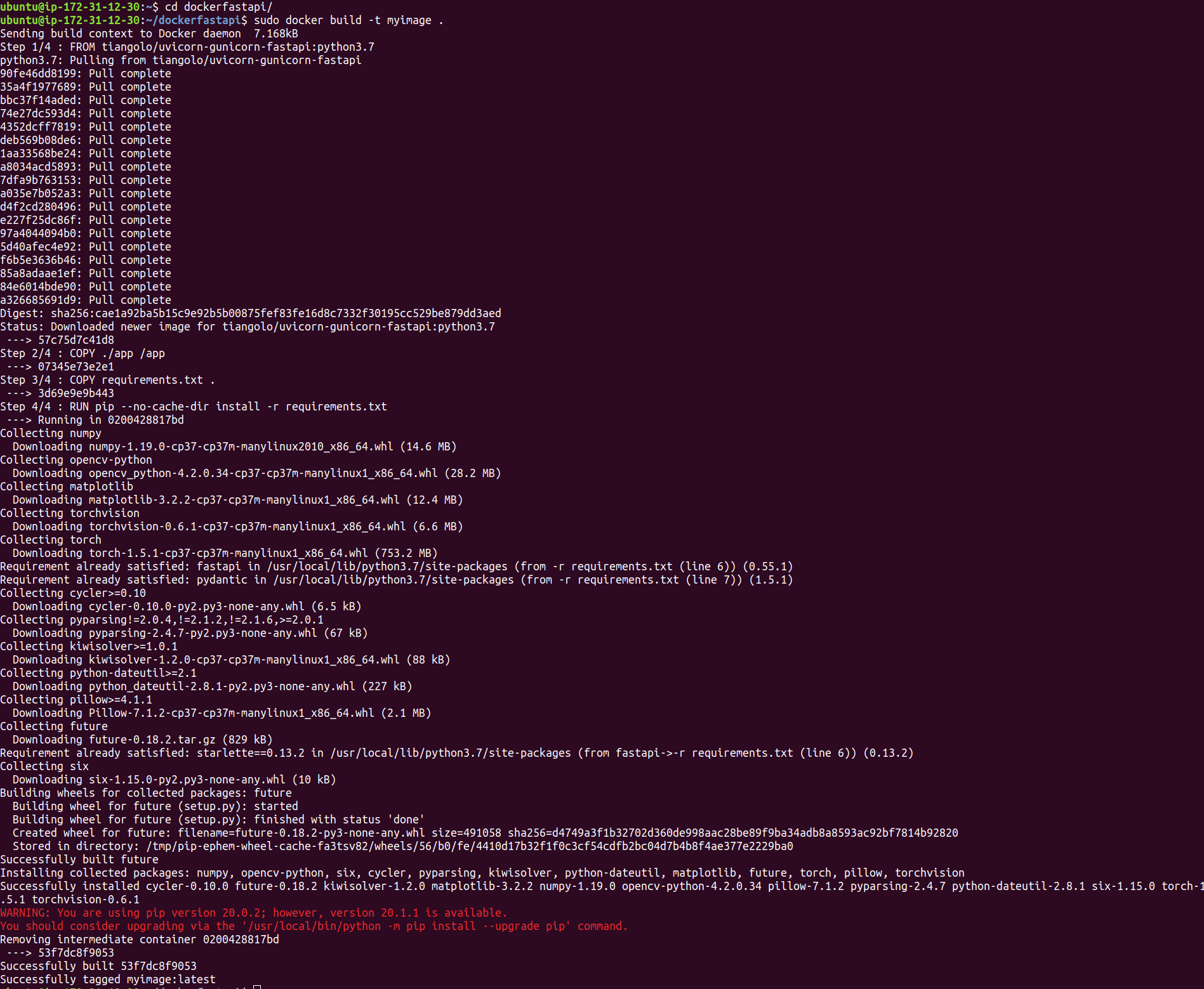 We will then just need to start a container that runs this image. We can do this using:

This will create a container named mycontainer which runs our docker image myimage. The part 80:80 connects our docker container port 80 to our Linux machine port 80.

And actually that’s it. At this point, you should be able to open the below URL in your browser.

And we can check our app programmatically using:

Yup, finally our API is deployed.

D. Troubleshooting as the real world is not perfect

All the above was good and will just work out of the box if you follow the exact instructions, but the real world doesn’t work like that. You will surely get some errors along the way and would need to debug your code. So to help you with that, some docker commands may come handy: 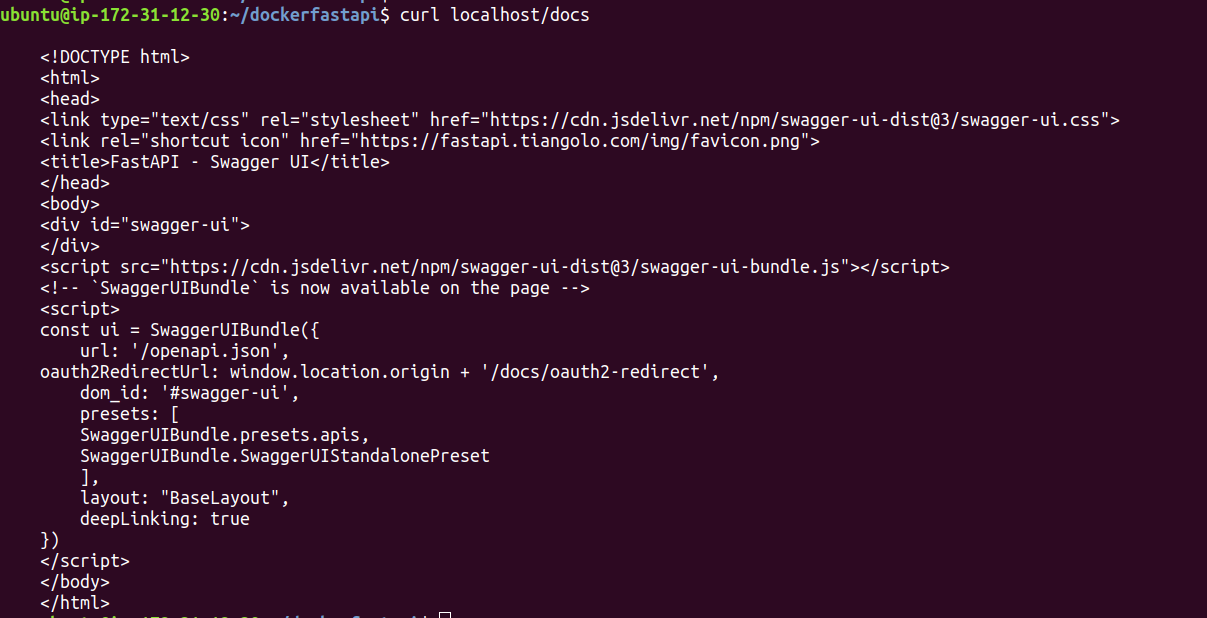 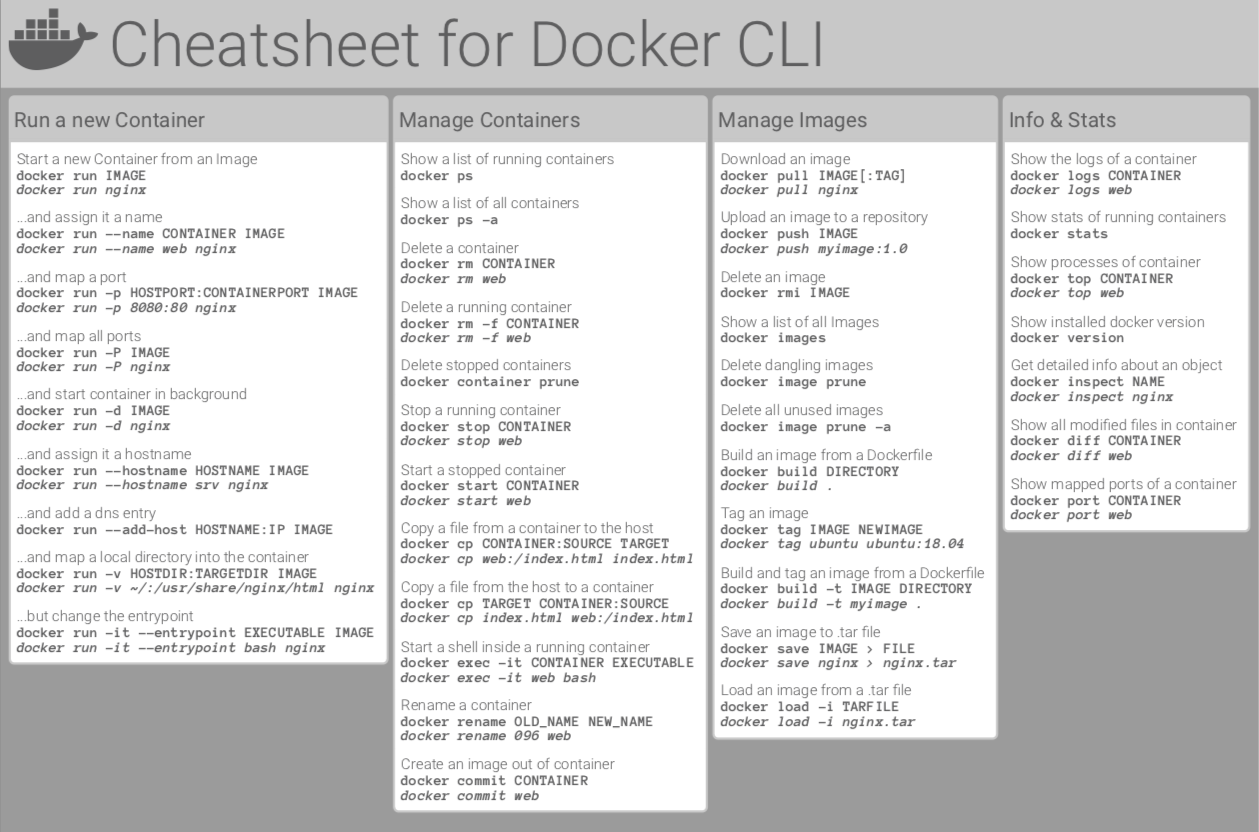 We are done here with our API creation, but we can also create a UI based app using Streamlit using our FastAPI API. This is not how you will do it in a production setting (where you might have developers making apps using react, node.js or javascript)but is mostly here to check the end-to-end flow of how to use an image API. I will host this barebones Streamlit app on local rather than the ec2 server, and it will get the bounding box info and classes from the FastAPI API hosted on ec2.

If you need to learn more about how streamlit works, you can check out this post . Also, if you would want to deploy this streamlit app also to ec2, here is a tutorial again.

Here is the flow of the whole app with UI and FastAPI API on ec2: 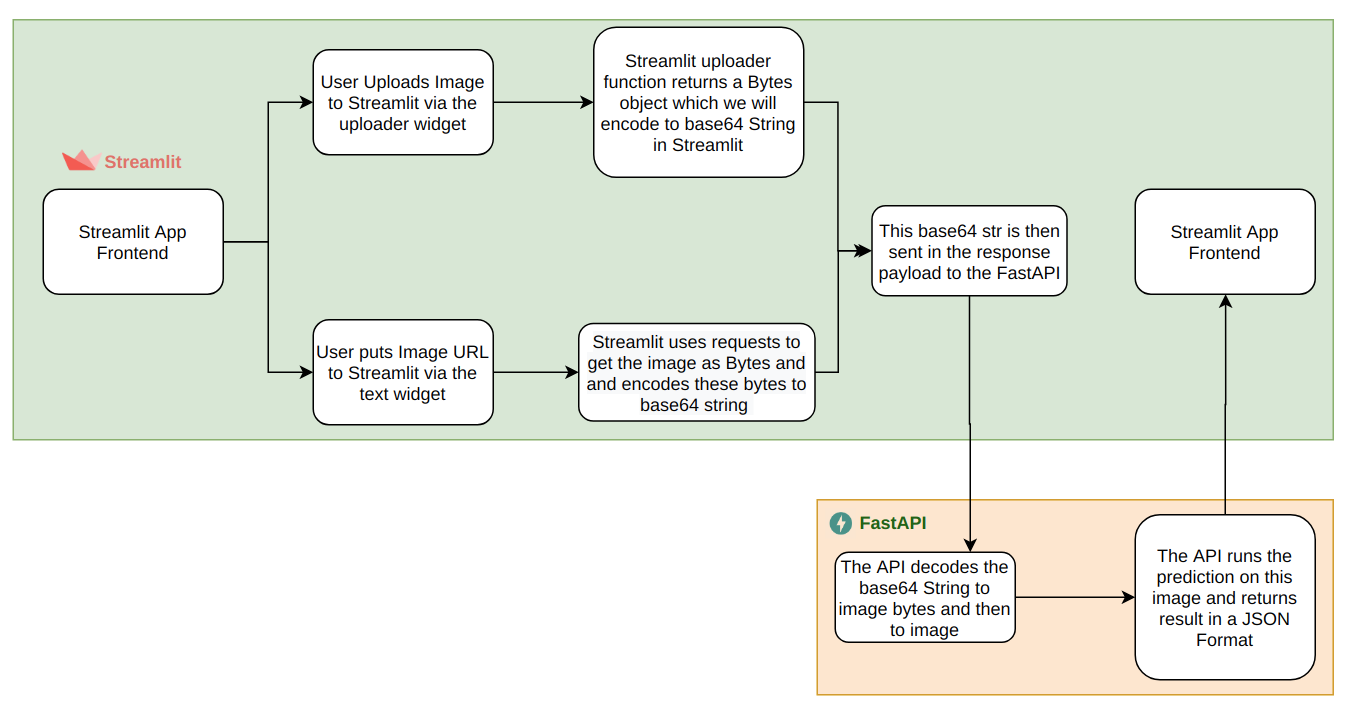 The most important problems we need to solve in our streamlit app are:

How to get an image file from the user using Streamlit?

The next problem is, what is this bytesObj we get from the streamlit file uploader? In streamlit, we will get a bytesIO object from the file_uploader and we will need to convert it to base64str for our FastAPI app input. This can be done using:

B. Using URL: We can also get an image URL from the user using text_input.

We can then get image from URL in base64 string format using the requests module and base64 encode and utf-8 decode:

And here is the complete code of our Streamlit app. You have seen most of the code in this post already.

We can run this streamlit app in local using:

And we can see our app running on our localhost:8501. Works well with user-uploaded images as well as URL based images. Here is a cat image for some of you cat enthusiasts as well.

So that’s it. We have created a whole workflow here to deploy image detection models through FastAPI on ec2 and utilizing those results in Streamlit. I hope this helps your woes around deploying models in production. You can find the code for this post as well as all my posts at my GitHub repository.

Let me know if you like this post and if you would like to include Docker or FastAPI or Streamlit in your day to day deployment needs. I am also looking to create a much detailed post on Docker so follow me up to stay tuned with my writing as well. Details below.

Thanks for the read. I am going to be writing more beginner-friendly posts in the future too. Follow me up at Medium or Subscribe to my blog