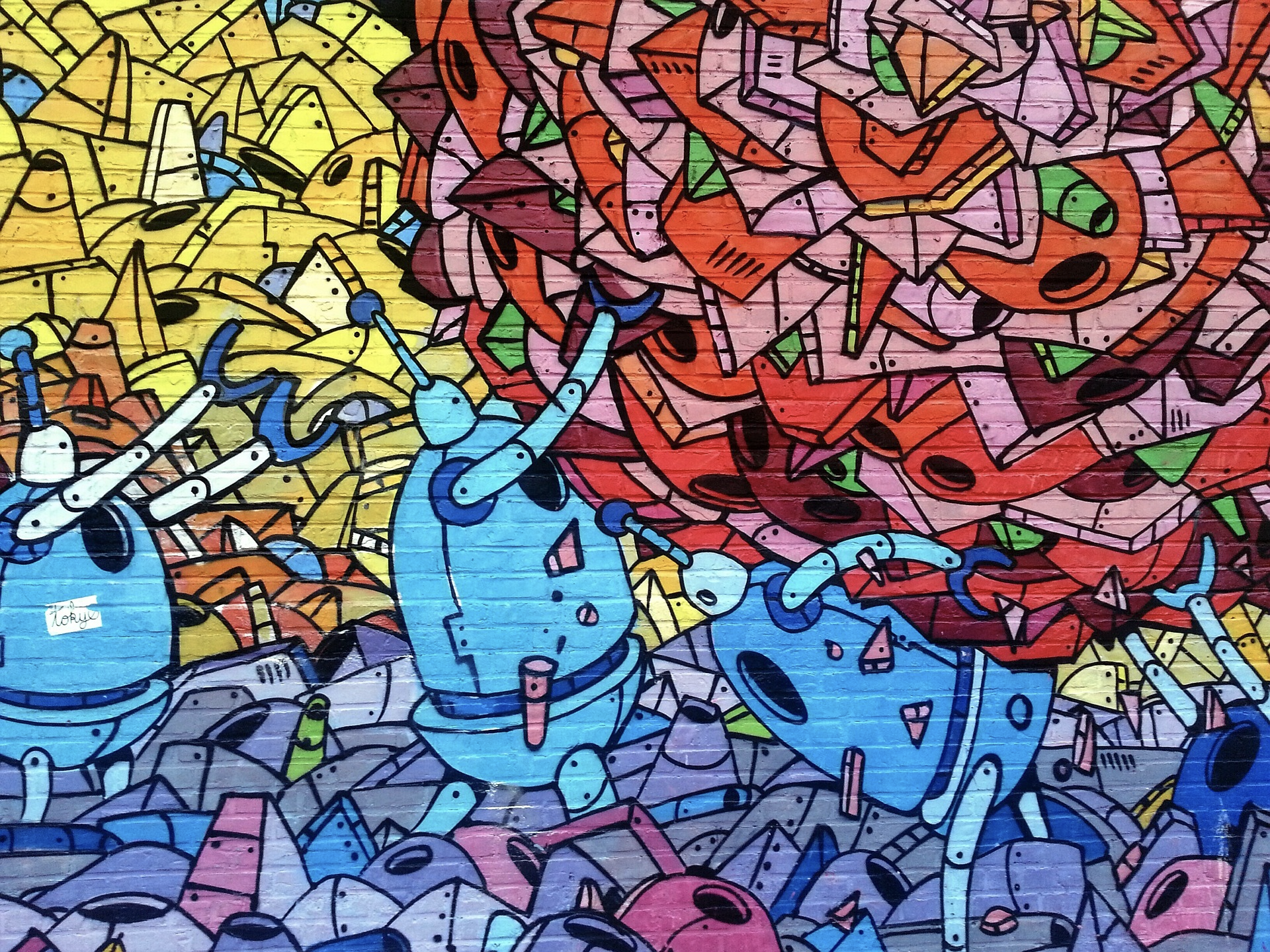 I distinctly remember the time when Seaborn came. I was really so fed up with Matplotlib. To create even simple graphs I had to run through so many StackOverflow threads.

The time I could have spent in thinking good ideas for presenting my data was being spent in handling Matplotlib. And it was frustrating.

Seaborn is much better than Matplotlib, yet it also demands a lot of code for a simple “good looking” graph.

When Plotly came it tried to solve that problem. And when added with Pandas, plotly is a great tool.

Just using the iplot function, you can do so much with Plotly.

But still, it is not very intuitive. At least not for me.

I still didn’t switch to Plotly just because I had spent enough time with Seaborn to do things “quickly” enough and I didn’t want to spend any more time learning a new visualization library. I had created my own functions in Seaborn to create the visualizations I most needed. Yet it was still a workaround. I had given up hope of having anything better.

Comes Plotly Express in the picture. And is it awesome?

I just had to try it out.

And have the creators made it easy to start experimenting with it?

One-liners to do everything you want? ✅

Standardized functions? Learn to create a scatterplot and you have pretty much learned this tool — ✅

Just a sneak peek of what we will be able to create(and more) by the end of this post. Using a single line of code.

Ok enough of the talk, let’s get to it.

First the Dataset — Interesting, Depressing and Inspiring all at once We will be working with the Suicide dataset I took from Kaggle. This dataset is compiled from data taken from the UN, World Bank and World Health Organization. The dataset was accumulated with the inspiration for Suicide Prevention. I am always up for such good use of data.

First I will do some data Cleaning to add continent information and Country ISO codes as they will be helpful later:

Let us look at the suicides data:

I will also group the data by continents. Honestly, I am doing this only to show the power of the library as the main objective of this post will still be to create awesome visualizations.

The final data we created:

We are ready to visualize our data. Comes Plotly Express time. I can install it just by a simple:

and import it as:

Now let us create a simple scatter plot with it. 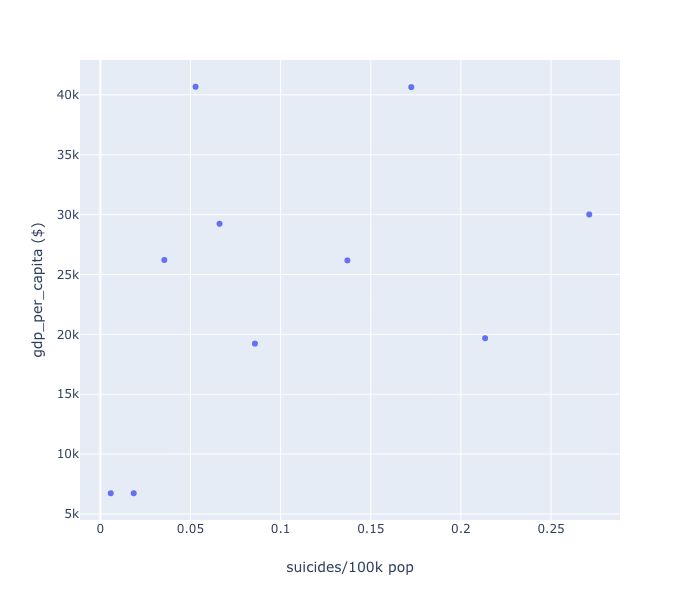 Not very inspiring. Right. Let us make it better step by step. Lets color the points by Continent. 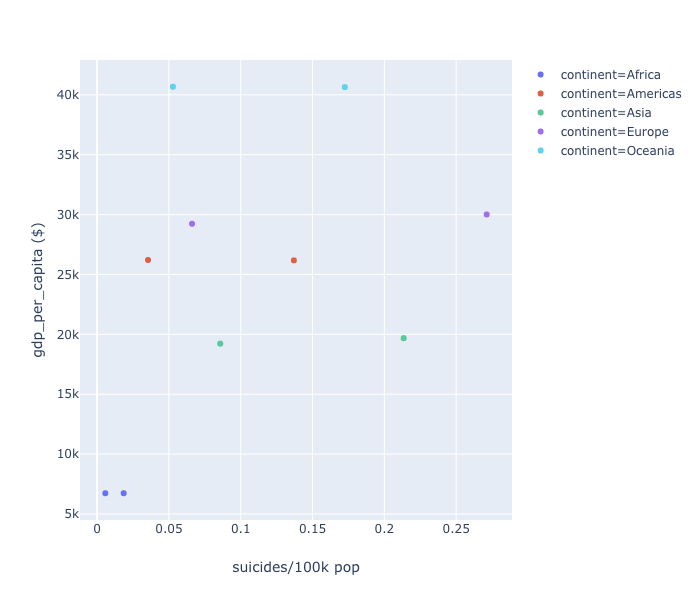 Better but not inspiring. YET.

The points look so small. Right. Let us increase the point size. How? What could the parameter be…. 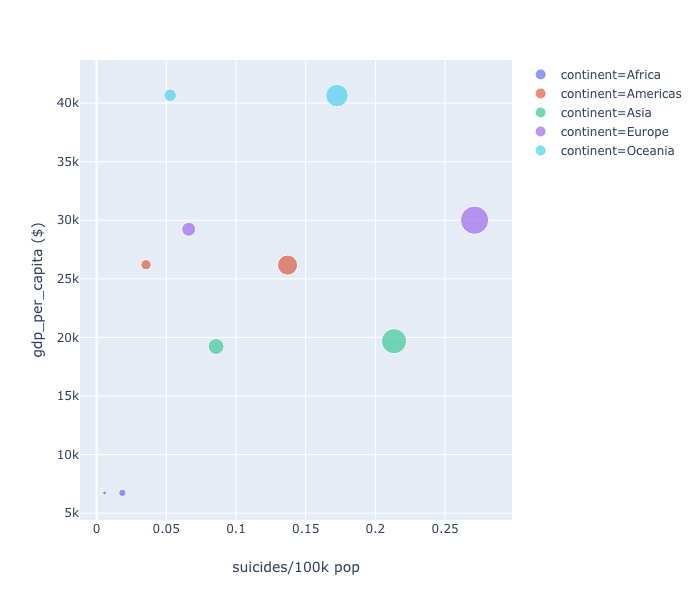 Let me show them both. 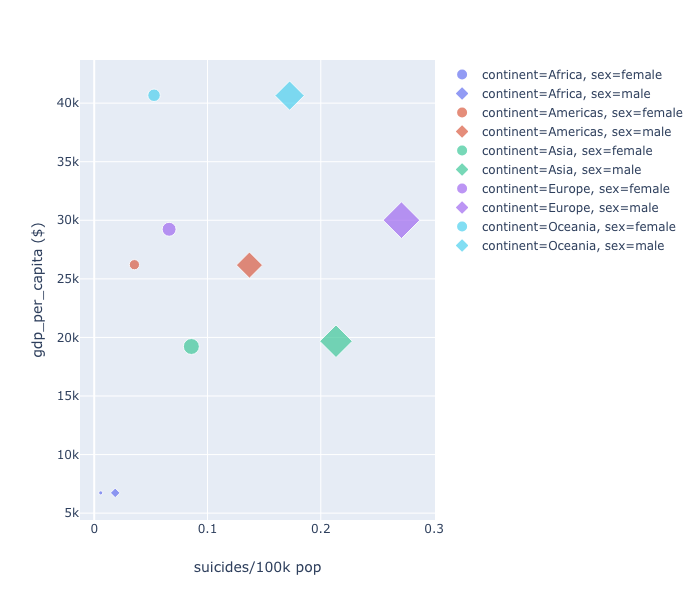 We could also create a faceted plot. 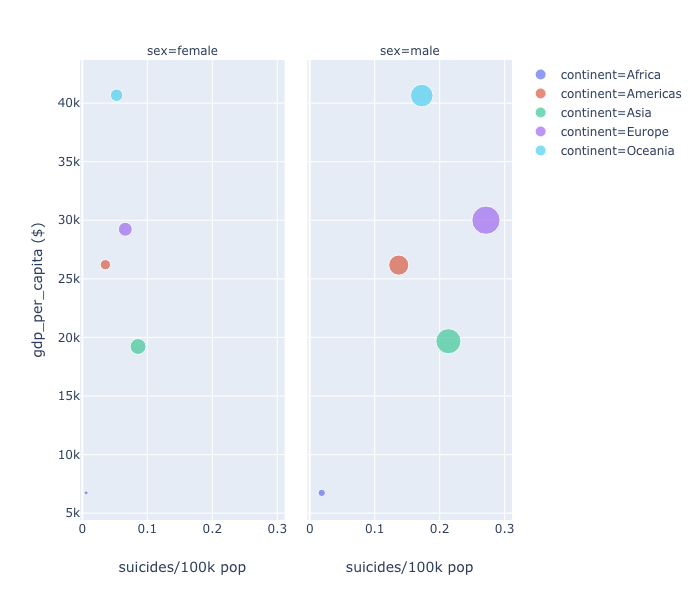 The triangles are for male and the circles are for females in the symbol chart. We are already starting to see some good info from the chart. For example:

Still not inspiring? Umm. Let us add some animation. That shouldn’t have to be hard. I will just add some more parameters,

Wait for the gif plot to show.

In the Jupyter notebook, you will be able to stop the visualization, hover over the points, just look at a particular continent and do so much more with interactions.

So much information with a single command. We can see that:

All of my above observations would warrant more analysis. But that is the point of having so much information on a single graph. It will help you to come up with a lot of hypotheses.

The above style of the plot is known as Hans Rosling plot named after its founder.

Here I would ask you to see this presentation from Hans Rosling where he uses Gapminder data to explain how income and lifespan emerged in the world through years. See it. It’s great.

So till now, we have learned about scatter plots. So much time to just learn a single class of charts. In the start of my post, I told you that this library has a sort of standardized functions.

Let us specifically look at European data as we saw that European males have a high Suicide rate.

Just like that, we have learned about animating our bar plots too. In the function above I provide a category_order for the axes to force the order of categories since they are ordinal. Rest all is still the same.

We can see that from 1991 to 2001 the suicide rate of 75+ males was very high. That might have increased the overall suicide rate for males.

Want to see how the suicide rates decrease in a country using a map? That is why we got the ISO-codes for the country in the data.

How many lines should that take? You guessed right. One.

The plot above shows how suicide rates have changed over time in different countries and based on the info we get from the plot the coding effort required is minimal. We can see that:

We can get quite a good understanding of our data just by seeing the above graphs.

Animations on the time axis also add up a lot of value as we are able to see all our data using a single graph.

This can help us in finding hidden patterns in the data. And you have to agree, it looks cool too.

This was just a preview of Plotly Express. You can do a lot of other things using this library.

The main thing I liked about this library is the way it has tried to simplify graph creation. And how the graphs look cool out of the box.

Just think of the lengths one would have to go to to create the same graphs in Seaborn or Matplotlib or even Plotly. And you will be able to appreciate the power the library provides even more.

There is a bit of lack of documentation for this project by Plotly, but I found that the functions are pretty much well documented. On that note, you can see function definitions using Shift+Tab in Jupyter.

Also as per its announcement article: “Plotly Express is totally free: with its permissive open-source MIT license, you can use it however you like (yes, even in commercial products!).”

So there is no excuse left now to put off that visual. Just get to it…

If you want to learn about best strategies for creating Visualizations, I would like to call out an excellent course about <strong>Data Visualization and applied plotting</strong> from the University of Michigan which is a part of a pretty good <strong>Data Science Specialization with Python</strong> in itself. Do check it out

I am going to be writing more beginner friendly posts in the future too. Follow me up at <strong>Medium</strong> or Subscribe to my <strong>blog</strong> to be informed about them. As always, I welcome feedback and constructive criticism and can be reached on Twitter @mlwhiz